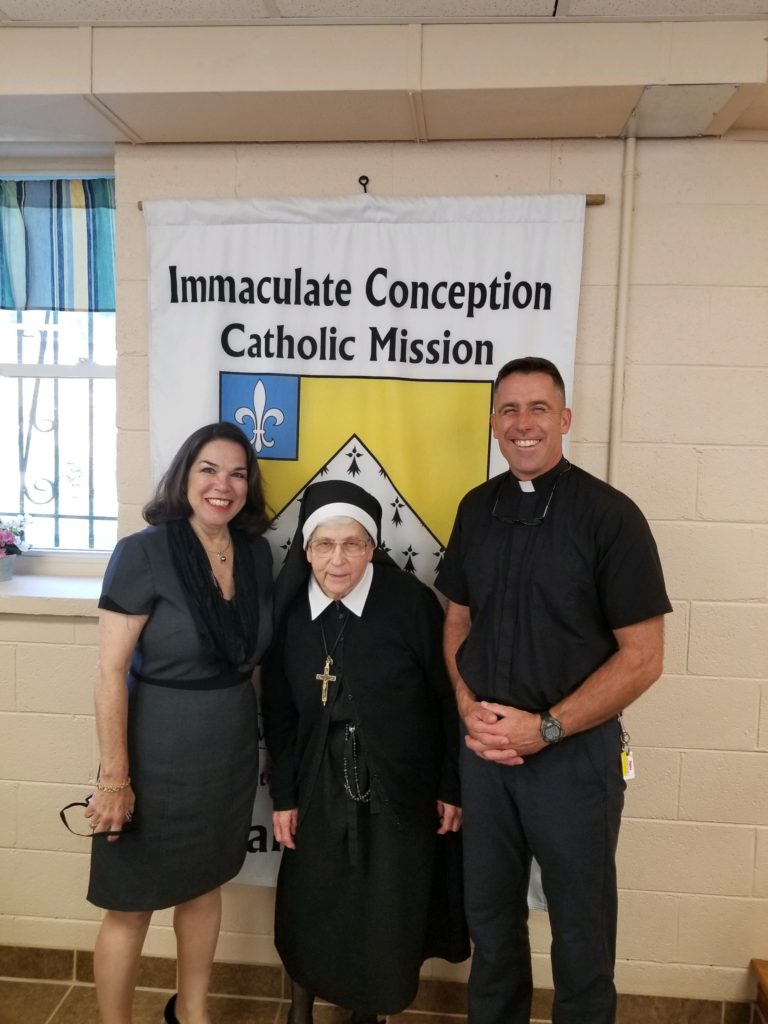 Immaculate Conception Catholic Church traces its beginnings back to the 1940s, when Catholics in the area gathered for Mass in private homes. Father Ambrose Rohrbacker, then-pastor of St. John the Evangelist Catholic Church in Waynesville, North Carolina, celebrated those liturgies; later a mission was established in Canton, North Carolina.

During the gasoline-rationed World War II years, a school bus transported Canton Catholics through the mountains to Waynesville for Mass. The local Catholic population increased when veterans, Catholics among them, returned home after the war. Catholics were also included in the workforce who gained employment at a new paper mill in town.

In Canton, Mass was celebrated in the YMCA building during the early ’50s. An altar was set up on a bare floor, and parishioners sat on slatted wooden chairs. A hallway served as the confessional. The visiting priest brought a makeshift altar: a suitcase containing vestments and altar furnishings, which folded out and was propped on legs.

Father (later Msgr.) Lawrence Newman was pastor of St. John the Evangelist Catholic Church when one of his parishioners, Mrs. R. E. Davis, informed him that suitable property for a church in Canton was for sale. The lot was purchased, the house on it was torn down and a parking lot was constructed.

All this activity made way for construction of the new Immaculate Conception Catholic Church to begin. A church hall and kitchen were included on the lower level of the new building. The redbrick structure is simple in design, with a native pine ceiling and ornate stained-glass windows highlighting the church’s nave.

In 1954, the 54 members of the Canton mission gathered with Bishop Vincent S. Waters of Raleigh, Father Newman and more than 20 other priests during the dedication service. The event had added significance for one group of parishioners, who received the sacrament of confirmation during the Mass.

Presently, Father Shawn O’Neal, administrator of St. Joseph Catholic Church in Bryson City and Our Lady of Guadalupe Catholic Church in Cherokee, celebrates Mass in Spanish about once a month for about 100 Hispanic worshipers in Canton.

Immaculate Conception Catholic Church celebrated its 25th anniversary in 1979 with a Mass concelebrated by Bishop Michael J. Begley, the Diocese of Charlotte’s founding bishop, and a dozen priests who had served the area’s Catholics.

Registered membership in the mountain mission has both declined and swelled since those early years. Retirees now make up a significant percentage of today’s parish and Mass attendance goes up each summer as Catholic visitors flock to the area to take in Haywood County’s cool mountain air and slow-paced lifestyle.