Do not adorn the church and ignore your afflicted brother

From a homily on Matthew by Saint John Chrysostom, bishop

Do not adorn the church and ignore your afflicted brother

Do you want to honor Christ’s body? Then do not scorn him in his nakedness, nor honor him here in the church with silken garments while neglecting him outside where he is cold and naked. For he who said: This is my body, and made it so by his words, also said: You saw me hungry and did not feed me, and inasmuch as you did not do it for one of these, the least of my brothers, you did not do it for me. What we do here in the church requires a pure heart, not special garments; what we do outside requires great dedication.

Let us learn, therefore to be men of wisdom and to honor Christ as he desires. For a person being honored finds greatest pleasure in the honor he desires, not in the honor we think best. Peter thought he was honoring Christ when he refused to let him wash his feet; but what Peter wanted was not truly an honor, quite the opposite! Give him the honor prescribed in his law by giving your riches to the poor. For God does not want golden vessels but golden hearts.

Now, in saying this I am not forbidding you to make such gifts; I am only demanding that along with such gifts and before them you give alms. He accepts the former, but he is much more pleased with the latter. In the former, only the giver profits; in the latter, the recipient does too. A gift to the Church may be taken as a form of ostentation, but an alms is pure kindness.

Of what use is it to weigh down Christ’s table with golden cups, when he himself is dying of hunger? First, fill him when he is hungry; then use the means you have left to adorn his table. Will you have a golden cup made but not give a cup of water? What is the use of providing the table with cloths woven of gold thread, and not providing Christ himself with the clothes he needs? What profit is there in that? Tell me: If you were to see him lacking the necessary food but were to leave him in that state and merely surround his table with gold, would he be grateful to you or rather would he not be angry? What if you were to see him clad in worn-out rags and stiff from the cold, and were to forget about clothing him and instead were to set up golden columns for him, saying that you were doing it in his honor? Would he not think he was being mocked and greatly insulted?

Apply this also to Christ when he comes along the roads as a pilgrim, looking for shelter. You do not take him in as your guest, but you decorate floor and walls and the capitals of the pillars. You provide silver chains for the lamps, but you cannot bear even to look at him as he lies chained in prison. Once again, I am not forbidding you to supply these adornments; I am urging you to provide these other things as well, and indeed to provide them first. No one has ever been accused for not providing ornaments, but for those who neglect their neighbor a hell awaits with an inextinguishable fire and torment in the company of the demons. Do not, therefore, adorn the church and ignore your afflicted brother, for he is the most precious temple of all.” 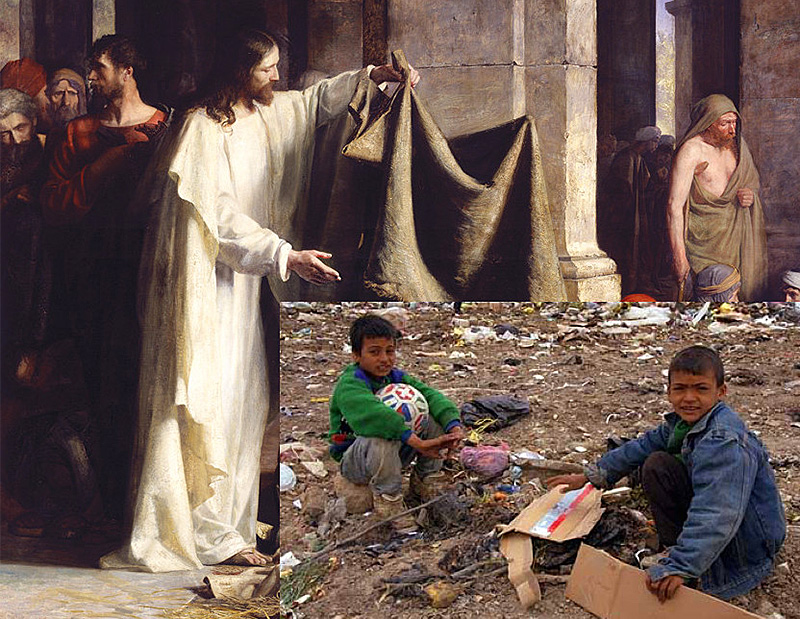