The One Minute Catecheses

First off, I apologize to those of you who were checking this blog on a regular basis.  Toward the end of November, things started getting busy as we prepared for the December events from the Guadalupe Novena to Las Posadas and then Christmas.

Second, for the next good bit, most of my posts will contain the One Minute Catechesis reflections that I began to offer at the end of my homilies a few weeks back.  I hope that they have been beneficial for you and have helped you come to a better understanding of some of the basic nuts and bolts of our Faith.

Below you’ll find the first two catechesis reflections.  Again, if there’s anything in particular you’d like me to talk about or cover, please let me know or send me an email @ pdmcnulty@charlottediocese.org.

OMC #1–What is Catechesis and why is it important?

During my first assignment at St. Mark in Huntersville, my brother priests and I decided to start a series at the end of our homilies titled The One Minute Catechesis. We did this because we saw that many of our parishioners, most of whom had been Catholic their entire lives, either misunderstood certain core Catholic beliefs or just didn’t know what the Church taught regarding other basic nuts and bolts aspects of our Faith—and to no fault of their own.

The Church hasn’t really done a good job teaching the faith—and I’m not just saying that as a priest, but as a cradle Catholic, having seen first hand how poorly the Church has taught the Faith. The main reason I held on to my faith was because of my upbringing in the faith at home, not because of my faith formation classes or my years in Catholic School.

So, I’m starting up the One-Minute Catechesis to teach some basics about why we do what we do as Catholics—why we pray in the way we do, why we believe what we believe, and why being Catholic isn’t the same as going to worship at any other Christian community.

If you’re saying, “ok, why call it Catechesis? That sounds like catechism, the big-green Catholic Encyclopedia.” Well, because words mean things and given what is happening to language in general today, it’s important to not let these words go. So, Catechesis by itself is a form of religious instruction or teaching, and it comes from the Greek word katēkhizein, which means to instruct orally.

Why is that important? Well, because that is how we learn as human beings. We learn through our senses, by touching, tasting, feeling, seeing and hearing. Hence the Sacraments of the Church and how our whole being participates at Mass.

People don’t just learn to read by looking at words on a page, but they are accompanied by a teacher, speaking and interacting with them. Musical Notes on a page are just notes until we hear the music and encounter it through our senses.

And when we hear those notes, when we hear the voice of the teacher, it makes an impression. That’s one reason why here at Mass and in other areas of our Catholic lives, we pray prayers out loud, we hear the word of God proclaimed to us, because they make impressions on us, not just on a human level but the more important spiritual level.

That’s why Our Lord sent the Apostles out to preach, not just by example, but through proclaiming the Good News. The Church has done this for 2,000 years and is still here because of this oral teaching and proclamation of the Word, which happens every time we come to Mass to worship God with soul, mind and body.

In the previous One Minute Catechesis, I introduced the series by talking about a couple things: what catechesis actually means, the importance of oral religious instruction, the meaning of the word, and why we’ve done it for 2,000 years and continue to do it at Mass and faith formation.

I mentioned that it’s important to not forget the deeper meaning behind words that are used in our Church tradition and life in general, especially with the direction modern language is heading.

So, as we begin to look at the Mass, one place to start is: “why do we call the Mass, the Mass?” The simple answer is that it comes from the old dismissal at the end of Mass when Mass was in Latin: Ite Missa Est—meaning “go, it (the congregation/church) is sent.”

During his papacy, Pope Benedict wrote an encyclical on the Mass titled Sacramentum Caritatis, or the Sacrament of Charity/Love. In it he commented on the dismissal saying, “these words (ite missa est) help us to grasp the relationship between the Mass just celebrated and the mission of Christians in the world. In antiquity, missa simply meant “dismissal.” However in Christian usage it gradually took on a deeper meaning. The word “dismissal” has come to imply a “mission.” These few words [concisely] express the missionary nature of the Church.

Off of this, then, Mass can be said to be “the sending forth.” We come to Mass to worship God, to be fed by the Word and the Eucharist, and then to be sent forth into the world to transform it by the power and grace of what we’ve just received.

Hence the importance of not leaving immediately after Communion, but remaining in prayer and thanksgiving for this great gift. And then after the final blessing, which blesses and confirms what we have received, we are sent forth into the world to preach the gospel with our lives, living truly as Our Lord’s disciples.

I’m writing this from my gate at Newark Airport waiting the flight to Lisbon.  Please be assured of my prayers and that you are all coming with me in my heart.  God bless you! 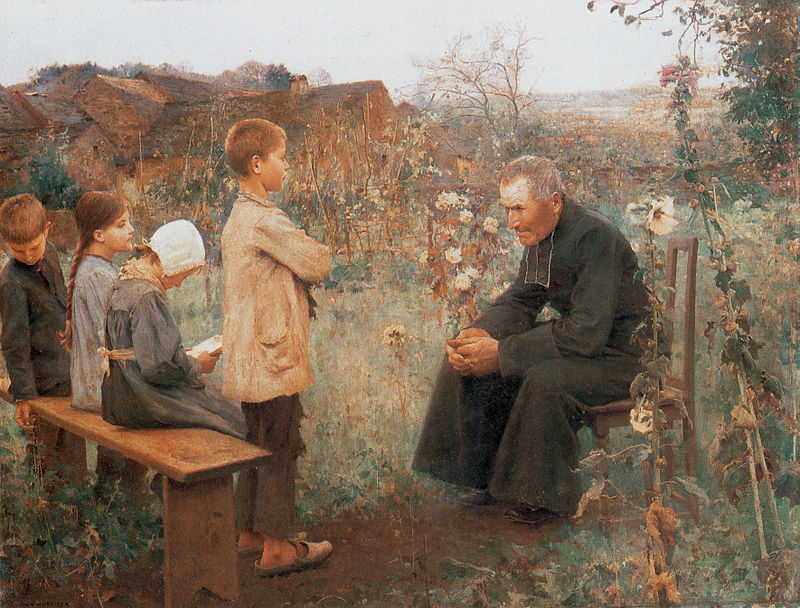